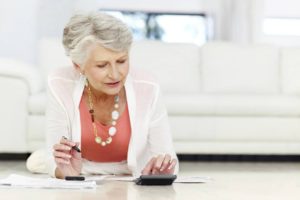 By Olivia S. Mitchell. (PHOTO: GETTY IMAGES/ISTOCKPHOTO) Boomer women, now in their 50’s and 60’s, are doing worse financially than older women in the 1990’s.  According to new research with Annamaria Lusardi of the George Washington University explains why, using national representative survey data from the Health and Retirement Study and the National Financial Capability Study. We track changes in older women’s work plans and debt burdens, along with the links to financial literacy and debt stressors.

One reason Boomer women are in worse shape is that older women today hold more debt than their peers did in the past. Boomers bought more expensive houses during the real-estate run-up, and, at the same time, took on larger mortgages with smaller down payments. The result has been that more women are reaching their 60s in debt, and the amount of their debt has also soared. It is worrisome that this will make them particularly susceptible to rising interest on adjustable-rate mortgages, when the Federal Reserve decides to boost rates.

Our study also shows that less financially literate women are unlikely to plan for retirement, rendering them financially fragile. This is an important result because of the growing importance of complex financial products and the fact that people today must bear more responsibility for their retirement than in days gone by. Our work therefore adds to a growing body of research showing that the financially illiterate do less well in managing their credit cards, pay more in financial-service fees, and spend more on interest and late fees. Indeed, financial literacy is key to enhancing women’s well-being in their later years.

Indeed, higher fractions of older women today are in financially fragile circumstances compared to two decades ago. We define as fragile having less than $25,000 in savings, and a full third of the boomers we surveyed reported having this little, versus one-fifth of the women in prior decades. A large number of boomers reported that they did not regularly pay their credit-card balances in full, and many paid only the minimum due, used their cards for cash advances, were charged fees for late payment, or exceeded their credit limits. Such behaviors tend to lead to people digging themselves into ever-deeper debt.

One reaction to this larger debt has been that many boomer women are remaining employed to pay their bills. They have also worked more their entire lives: For instance, older boomer women ages 51 to 61 were 8% to 11% more likely to be working now, compared to almost two decades previously. This makes it easier to work at older ages, with 20% more boomer women planning to still hold a job at age 65 compared to the past. This will help as deferring retirement can boost Social Security benefits by about 8% per year of delay–or over 75% for delaying claiming benefits from age 62 to 70. Not a bad return for a few more years of work, and a good way for boomer women to enhance their golden years.